If you’re like me and you started this project on the 1st January this year and you’ve yet to skip a day, then that means you’re coming to the end of the project – HOORAY! But, what next?

This project has been extremely challenging, frustrating, frightening, hilarious, interesting, and educational as well as the biggest time thief ever. I’m counting down the days until this is over. I’m trying really hard not to waste the last days with low quality images – I want to continue pushing out from my comfort zone as this was one of my goals when commencing this project. The challenge now, is to plan “what next”. I can discount another year of #project365 – I truly couldn’t imagine anything worse!
I’d like to hear from you, fellow #project365’ers. How have you found this project? Is it what you thought? Have you learnt anything from it? Did you take it seriously, or was it more of a lark? Are there any tips you’d like to share with your fellow #project 365’ers? What will you do when you complete your project?
I’d love to hear your thoughts, and maybe you can include a link to your project so I – and others – can check out your gallery.
13 comments:

Let me start by stating that I’m not a tennis fan. I can count on one hand the number of tennis games I’ve watched on TV. I did attend a tennis match. Once. I can’t remember who the players were, but I seem to think that one was a mover and shaker at the time and his name now escapes me. I have had about a dozen tennis lessons in my life but I wouldn’t even consider myself a “hit and giggle” player, more a “miss and stamp your feet” sort of player.
I had heard this book was good, an enjoyable read, so when I came across it , and saw the front cover - the piercing eyes on the front cover are difficult to ignore - I picked up a copy.  I originally bought this book for MOTH* so he would have something to read on a recent long flight but the book wasn’t removed from the in-flight bag. Not wanting to waste a book, I picked it up, read it and enjoyed it.

The candid, frank and open manner the book is written makes for a very easy read. It really doesn’t matter whether you’re a tennis fan or even an Agassi fan. While the tennis facts aren’t exactly “glossed over” in this book, they’re not the dominant part of the book. The candid manner of the book can mean that a whole tennis tournament is over in a breathless and fast-paced paragraph; other tournaments can take a lot longer but as breathless and exhausted Agassi was at the end of those tournaments, so will you be at the end of the narrative.  The tennis is just the means; the emotions, the thoughts, the feelings are what dominate this story.
I couldn’t put the book down – Will Agassi’s antics get him kicked out of tennis school? Will he win the latest match? And what about the tournament? Will he retire at the end of the season? How long can he keep playing top grade tennis for? And the mullet was really a toupee? (thank you BS for convincing him to get rid of that thing).  Of course, if you’re an Agassi fan, you would know all the answers to the above questions without having to pick up the book.  What you will get from this book is an insight into the joy and the pain of the journey of one man’s extraordinary tennis-driven life.  A journey that Agassi has struggled with and is perhaps only now coming to a point of peace and acceptance as he is perhaps finally free to follow his passions – his family and school.
*Man Of The House
No comments:

Where do you get images to decorate your blog?

Blogging is so easy and accessible that it’s no wonder so many keep blogs these days. You don’t need to know computer code in order to start a blog and there are so many blogging platforms to choose from, many of them free.  Once you set up your blog, and start writing content, you’d probably like to add the occasional image to brighten up the blog for your reader.  But where do you get the images from?   You could supply your own images for your own blog or - many bloggers turn to Google.  The trouble is, just because an image is on Google, it doesn’t mean it’s free for you to use.  As a photographer, I understand that the moment I upload an image of mine onto the internet, the chances of someone else using that image without my authorisation is possible and there is nothing I can do to my images to prevent unauthorised use from occurring. If I saw this as a huge problem, I would simply choose not to publish my photographs online.  While I do choose to publish my photographs online, I would like to have a choice where and how I see my photographs displayed.  Take the image below as an example.
plainly ~ i love you by Adriana Glackin
Using the Tin Eye Reverse Image Search, I was able to search for my image and see where else on the internet my image would pop up.  I found the image in no less that 8 other blogs from around the world.  While I feel very flattered that they felt my image best reflected their blog posting, my name as the creator of the photograph was annoyingly missing. The other issue is that while the photograph was “clickable”, it led to a large version of the photograph and not to my website - grrr.  Had the blog writer linked back to my website AND mentioned the title of the image AS WELL AS my name, then I probably wouldn’t have a problem with my photograph being used on their blog. Remember – I’m very flattered, but I’m also annoyed that I haven’t received credit for that photograph.
So, my tips for image use are:
A strong word of caution – I have a fairly relaxed attitude to usage of my photographs as you can see by the tips above, but not all photographers and artists share my relaxed point of view.  It is with extreme caution that you undertake to use someone else’s image without their authorisation. Not only will some photographers/artists use all their legal might to ensure you remove their image from your blog, they will also contact the likes of Google, Blogger, Wordpress and inform them of the image theft that has taken place.  The likes of Google, Blogger, Wordpress and others take a very dim view of image theft and they can, and will close your blog down. And all because you didn’t use your manners and ASK...So people, just because we live in the modern world, let's not forget our old fashioned manners. Do the polite thing - Ask and Link! Happy blogging.
2 comments:

Have You Started Your Christmas Shopping Yet? 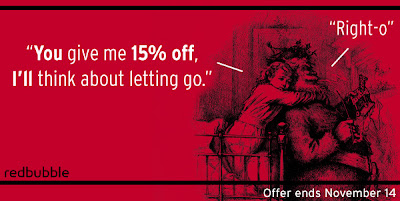 Yes, no, maybe, you don't want to think about it?
Well think about this - until 14th November 2010, Red Bubble have are having a sale -
15% off all my works when you use the voucher code
"dabble_is_on_sale_7255".
Remember, this code will only work on my photographic art items.
No comments: